Our rules, even those seemingly feminist, defining what constitutes a ‘respectable woman’ only reinforce women and girls’ status as sex objects.

In a recent interview with NME magazine Rihanna distanced herself from Taylor Swift and the singer’s good-girl image saying, “In my mind, she’s a role model, I’m not.” The words have social media discussing whether or not the “Bad Girl” threw shade at Taylor Swift by not wanting to be in her “squad.”

Pop personality politics aside, Rihanna’s assessment brings up an interesting question, namely: What kind of women do we consider to be role models? One might think that a survivor of domestic violence, rags-to-riches billionaire, and best-selling black artist of all time and the 2nd best-selling female artist only behind Madonna fits the description. But in our culture, what constitutes a female role model has some extra special criteria.

Google image search “women role models” and what you will see is not just women we venerate but women we revile. Juxtaposed next to female astronauts and mathematicians are images of sexualized women, “pretty” women, naked women. It’s a visual competition between the Oprahs and the Paris Hiltons. 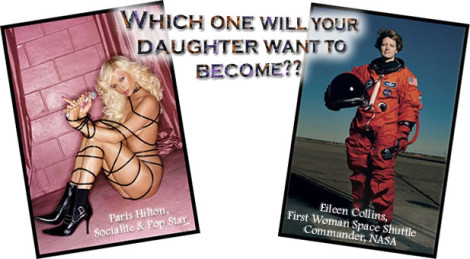 Similarly, you’ve probably seen this image floating around Facebook lately comparing Malala Yousafzai to Kylie Jenner. At first glance, the post might seem empowering—even feminist—to young women. After all, one is a courageous young woman who survived a gunshot to the face by the Pakistani Taliban and recently opened up a school for Syrian refugees. The other? A reality TV star who has spent who-knows-how-much altering her appearance.

But why are we comparing the two? Can one not exist without the other?

Unlike their female counterparts, men suffer no such comparisons when it comes to finding male heroes to celebrate. The men we deem poor role models aren’t “bad” because they spend too much time on their looks or have shown too much skin. Rather, they are poor role models for really good reasons like dog fighting or vandalism and assault. Yet we feel the need to measure “good” women (or the idea of what women should be) against the “bad”—and it’s almost always contingent on their bodies and sexuality.

This need for comparison is nothing more than a reboot of the virgin-whore dichotomy. We could describe it as the sweetheart-vs-slut dichotomy or, in the case of Kylie Jenner, the intellectual-vs-bimbo dichotomy.

Malala Yousafzai is an amazing young woman. That’s for sure. But what about Kylie Jenner? What makes her an unworthy “role model” or someone to be shamed? Is it the fact that she cares too much about her appearance? That she has altered her appearance to fit in with mainstream cultural beauty standards?

Jenner has grown up in front of us—her life from puberty to legal status documented. All the while she’s been surrounded by a culture obsessed with physical appearance and beauty. We obsess over the Kardashians and then turn around and scoff at the 18-year-old’s attempt to live up to her family’s reputation and fame. We judge her because she, as a young woman, has chosen to alter the way she looks. She has sexualized herself from a young age as she has been sexualized. Is that our problem or hers? Jenner is a product of our culture. We consume her then turn around and judge her for it.

Some goes for Rihanna. What makes her a poor role model? Both she and Swift are sexual. However, the latter does it in a socially acceptable way. She is skinny. She is blonde. She is white. Her sexiness is “cute” while Rihanna’s is deemed “edgy.” (Rihanna herself has poked fun at the hate she receives for her unapologetic presentation.) What Swift represents is our culture’s comfort level with female sexuality—one that is “classy,” modest, and cute—an object of male desire rather than a subject.

YouTube personality Nicole Arbour has recently drawn a lot of criticism for her video shaming fat people. What has received less attention is this recently released video bashing “Instagram models.” In it, Arbour gives her idol, UFC champion Rhonda Rousey, props for her commentary on “do nothing bitches” saying, “Rhonda is a UFC champion and a bikini model…You have to have a talent other than titties.” She goes on to assure young women that, “The sexiest booking you’ll ever get, is being a role model. And we all got the booking.”

But what does being an “Instagram model” have to do with being a female role model? Why can’t both coexist? Why the comparison? 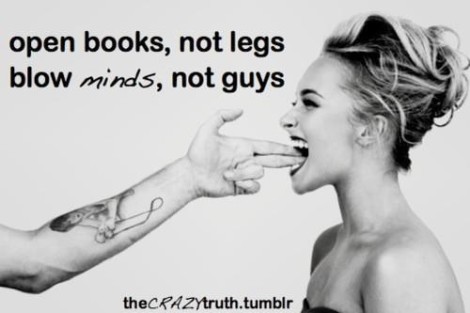 Malala was attacked specifically because she was challenging female stereotypes about modesty and a woman’s place in society. When we shame young women and girls for how they dress or look, we are, in effect, doing the work of the Taliban. Brains are not in competition with breasts—a woman’s body and sexuality do not make her inherently unworthy or shameful.

It’s clear that the people who express these sentiments or share these posts on Facebook believe they’re encouraging young women to be more than “pretty faces,” than sex objects. In actuality what they are doing is reinforcing women and girls’ status as sex objects. It’s respectability politics—the idea that women should behave and dress in certain ways to deserve basic respect afforded a human being. It denies women and girls sexual agency and the ability to be complex individuals. Our rules, even those seemingly feminist, defining what constitutes a respectable woman or female “role model” are inherently unfeminist. The reality is Malala Yousafzai is a wonderful human being. Her awesomeness does not take anything away from Kylie Jenner. Nor does Jenner’s full lips or figure take anything away from the 18-year-old activist.

“Lady in the street and freak in the bed” goes the memorable line from Usher’s song “Yeah!” Here’s to a world where women and girls are recognized for more than what they do with their bodies.

Jessica Schreindl is a freelance writer and TV producer in Seattle, Washington. She is a contributing writer for Mic.com and has been published on Feministing.com. She graduated with her M.A. from Syracuse University where she studied film history and documentary filmmaking.