The people who laugh at this picture won’t know that every jeer, every “Mooooo!” every “Sorry, no fatties” made me more and more successful at being bodiless.

One night, about 10 months ago, I got an email from a friend in Vermont, with the subject line “Is this you!?”

I clicked it open, and the friend had sent me a link to a website called Youredoingitwrong.com, which is a site of all viewer-submitted photos of people doing things hilariously, ignorantly wrong, in public. The exact page, or image, that this friend had sent was the inside of a Snap Fitness workout center, and the camera point-of-view was looking at the back of a person on a treadmill—looking through and past some pieces of exercise equipment in the foreground, as if, you know, spying.

The person we see on the treadmill is quite large, and though we can’t see her face, she seems to be female because she has long hair in pigtails. She’s wearing denim overalls, big denim overalls, like a farmer, and—this is the important part—she’s not walking on the treadmill. Her big body in her big E-I-E-I-Overalls is sitting in one of Snap’s spindly little red folding chairs, on the treadmill—which is not moving—and she’s looking up above the treadmill display, watching the flat-screen TV that’s mounted on the wall. She is, for sure, “doing it wrong.” 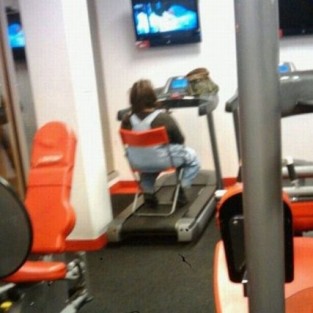 “Is this…you?!” wrote my friend Angie.

A couple hours later—this is truly crazy—I got an email from my mother, with whom I haven’t spoken in a decade, because we’re estranged. She wrote, “Hi, Amy. I hope you’re doing well. I got a hip replaced. Your sister had two more babies. Say, I’m on Ellen DeGeneres’s funny mailing list, and… is this you?!?!” And what she attached was—apparently Ellen sends out a humorous email to her bazillion-people fan base once a week, and on this particular week, she sent viewer-submitted photos of humans doing hilariously misguided shenanigans, and there was that same photo—of the fat woman, in overalls, sitting in a chair, on a treadmill…watching TV.

Flashback, to November 2010. I had had an acting gig, doing improv at a party, and afterward, I was all revved up, and I thought, “Ooh, I’m going to go work out!” And so I went to my gym, the Snap Fitness on Lagoon Avenue, in Uptown, which, if you’ve seen it, you know is basically a crappy little storefront. The selling point, however, is that it’s open 24 hours, and I’m a night owl, and I am poverty-stricken and don’t have TV at home—I mean, I have a TV, that exists as a horizontal surface to set things down on, but I can’t afford cable—so I got in the groove of treadmilling late at night, while watching television.

So, on this November night, in 2010, I got on my favorite treadmill, which was the one closest to Snap’s big glass window, and I stumbled upon a “House” marathon. I know! Like, five episodes in a row! One of them’s gotta be lupus! I treaded for 80 minutes, my typical time, and when I was done, there was still more “House” to partake in, so I changed back into my regular clothes…and dragged a chair onto the treadmill…and kept watching.

And I should have known.

I should have realized.

The comedic gold, of this body, sitting in a chair on a treadmill, staring glassy-eyed up at a screen.

I should have realized that I was in Uptown, at bar closing.

With everything I’ve lived through already…I should have been smarter.

But I had immersed myself fully into “House,” totally absorbed by what was and wasn’t Addison’s disease and porphyria and sarcoidosis (ohhhh, the sarcoidosis!)…and I didn’t think to make a less hilarious life choice.

I heard something outside the gym window, and turned to see a pack of hipster boys laughing their asses off, with their cellphones out, taking pictures of me, recording video. I jumped up to try to stop them, but they were long gone by the time I reached the door. And I thought to myself, “Fuck. Shit. This…is going to end up all over the Internet.”

I didn’t know that I was right until those two emails, three years later, asking “Is this you?!”

And I don’t know why those two emails happened to get to me on the same night, referencing something that had probably been posted three years earlier, but they sent me into a frenzy. Because if I was part of two humor websites…how many more might I be on? It did not feel good…but I Googled.

I found nine. Nine websites, including Facebook. Some don’t have comment threads…but a lot of them do. I shouldn’t have read the comments. But I did.

“Wait, are you sure that’s a woman?! Are you sure it’s not a farm animal?”

“Hey, at least she burned a few calories dragging the chair onto the treadmill.”

And I felt that panic overtake me, of needing to change reality immediately, and so I clicked every clickable thing in clickxistance, trying to find how to get even one of the photos off the interwebs.

Meanwhile, my friends passed around links on Facebook to “Caption this Fashion Disaster!” and “People of Wal-Mart” and an app called “Make My Face Fat!”

And I felt my insides fill with anvils.

I knew there was nothing I could do about those nine websites.

It’s not just the fat-bashing that hurts.

Or the humiliation, the shaming, this last safe societal prejudice. All that is bad, of course.

What really hurts, though? Is how much the boys who took that photo of me “doing it wrong”—and the thousands of people who see it—will never know.

They’ll never know how experiences just like this began dividing me—early—from my body. That the taunts of fatty and blubber and lardass when I was 6 made me stand at my bedroom window and wonder if it was a long enough way down to the ground; that when the kids at lunch poked my stomach with pencils to see if I’d deflate, I honestly wished I would, with a long, satisfying “sssssss”; that by the time Ms. Gleby was leading my entire 6th grade Phys Ed class in laughing at me, I no longer had a body at all. I was a floating head, and I was determined to think of my physical form as a…brick, that I had to suffer the inconvenience of dragging around. My body wasn’t me. It was despicable. It was nothing.

The people who laugh at this picture won’t know that every jeer, every “Mooooo!” every “Sorry, no fatties” made me more and more successful at being bodiless.

And they won’t know how scary it’s been to decide to maybe make a different choice.

They’ll never know what came before that treadmill-sitting moment: 80 minutes of aerobic exercise. They’ll never know how long it took me to feel worthy of motion, worthy of joining a gym, how long it took me to decide that moving actually felt good, and then the discovery that this was the way to reunite my floating head with the rest of me, to feel my body at its most basic, a biochemical machine that supports me…and that’s what I am on a treadmill, that’s what bodies are, they are not appearance, they are purpose. It’s so hard—irrationally hard—to remember that.

The world makes it hard to remember.

It’s ironic that it was while I was watching a marathon of my favorite TV show where a snarky doctor diagnoses what’s wrong with human bodies that a pack of snarky boys diagnosed what was wrong with my body. The whole point of “House” is that his patients suffer his callousness and disrespect because that’s the necessary tradeoff for his brilliance.

But there’s no brilliance to these boys; there’s no reason to suffer them.

So much of me will always, and forever, want to scream NO.

But that would deny the steadfast, loyal muscles of my legs that walk, and my aging spine that keeps me upright, and the fact that when I feel so damaged and alone that I go to bed praying to not wake up in the morning, my stupid little heart insists on beating anyway. And my big dumb lungs take in more air…and my billions of whiny, oversensitive cells slough and reproduce like they just didn’t get the memo. And I wake up another day.

The people who say “it’s what’s on the inside that matters” are wrong. It all matters. We can’t divide our insides from our outsides; we are all the complicated, amazing marriage of the physical and ephemeral. If there wasn’t this body, there wouldn’t be this specific me writing these specific words.

What I mean is…

Actor/writer/storyteller Amy Salloway has been called “kick-ass funny and achingly poignant”, “raw and fearless”, and “the voice for all of us who were picked last for kickball”.  Her three autobiographical solo comedies –“Does This Monologue Make Me Look Fat?,”  “So Kiss Me Already, Herschel Gertz!,” and “Circumference” — all began their lives at the Minnesota Fringe Festival and have gone on to tour to Fringes, theatres, colleges, festivals and events across the US and Canada.  Amy has contributed stories to MPR’s “In the Loop” radio show, CBC’s “Definitely Not The Opera” (the Canadian equivalent of “This American Life”), and the national podcast “Risk!”.  She’s a founding member of the narrative collective Rockstar Storytellers, teaches classes in memoir and creative writing, and performs regularly on just about every spoken-word-oriented stage in Minneapolis. For more info, check out www.amysalloway.com, or “like”www.facebook.com/awkwardmomentonstage.