Show people who you really are, at all angles, even make fun of yourself a little bit, and you make it more possible for others to do the same.

Recently a Facebook friend of mine commented on a status, “I really appreciate you having the courage to show yourself in so many states.” She was referring to my habitual “real selfies”: in my baggy-eyed just-woke-up puffy state; with a black eye I recently acquired boogie boarding; crazy post-exercise hair sticking up in spikes from my head; and many other variations on that unkempt theme.

It’s true, I post a lot of these “as I am” pics, but until my friend’s comment I’d never once thought of revealing myself as I am to be courageous.

Yet another time I posted a video after I’d had dental work, my mouth so numb that my speech was, I thought, hilariously slurred. By the end of the video I’d busted up in hysterics at my mouth’s inability to cooperate, giving me a hitching lisp. Most commonly, it brought viewers to hysterics as well. But another acquaintance wrote, “So brave of you to post that.”

Is it really brave to reveal oneself as is? And if so, why?

On the one hand, some of this speaks to the power of the messages we women are sent through the media: be pretty, be demure, put yourself together, don’t let yourself go, put on a pretty face, smile. On the other hand, when we see someone raw, messy, vulnerable, it reaches out and touches those often shameful-feeling, vulnerable parts of ourselves and suggests maybe it’s safe to be seen.

These statements about being “brave” suggest that at best, people would also like permission to reveal themselves unpolished and vulnerable, and at worst, that they fear the “consequences” of being seen as they really are.

Who among us isn’t afraid we won’t be accepted as we are?

A small piece of my habit of exposure is as simple as having grown up resisting my cosmetology-trained mother’s copious brushes and palettes of makeup, her constant attempts to renovate my face—“Just a little eyeshadow, please?” she’d say—the same way she did her own. But my habit also fits with my subscription to the Tina Fey school of self-deprecation: Show people who you really are, at all angles, even make fun of yourself a little bit, of the fact that you are posting yet another selfie—rather than just prop up one perfect image—and you make it more possible for others to do the same. 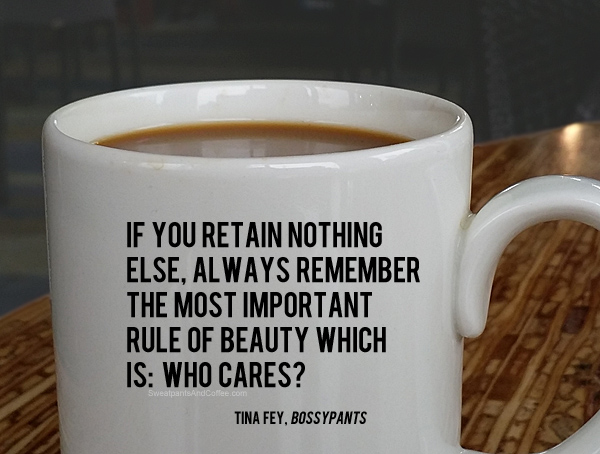 For me, revealing myself unvarnished to my Facebook peers is just one of the ways I prefer to connect with people. I got myself into trouble last year admitting online that I did not like to stand and make small talk with the other parents while picking up my son after school. To me, small talk is the epitome of non-vulnerable, surface-level conversation, and while it’s also inevitable while waiting for my son to get out of class, I dislike it to the point of discomfort. But over time I’ve noticed that those same moms whose feelings were hurt often meet me with further vulnerability when I post one of these goofy pictures of my bedhead or statues about my “failings” and flaws.

So while Facebook is the last place most of us go to find deep and meaningful discourse on topics, my experiences have shown there is power in pulling back the veneer and revealing ourselves as imperfect. We all ache and fight and try to appear strong when we’re weak, or put on makeup to cover up our tears because we’re human. And perhaps the more we all do this, the less of these false fronts we will have to keep up.

Maybe then, what my friend said is true: Showing our imperfections is a braver act than I knew.

Jordan Rosenfeld is author of: A Writer’s Guide to Persistence, Make a Scene, Write Free, and the novels Forged in Grace, and Night Oracle. Her essays have appeared or are forthcoming in: Brain, Child, Dame, Modern Loss, The New York Times, Paste, Purple Clover, The Rumpus, Stir Journal, the Washington Post, Role Reboot and more.

This originally appeared on Sweatpants & Coffee. Republished here with permission.