“Cancer patients are expected to be poster children of a movement, meant to reassure the masses that this plague, and even imminent death, can be overcome with positive affirmations and attitude adjustments.”

As if anyone needed reminding, October is Breast Cancer Awareness Month, and the pink is out in full force, Pepto Bismaling the world with its sticky, viscous (mis)representation of a disease that is not singular, but many-faced. There are at least four specific kinds of breast cancer (you can learn about them here) that have been reduced, in our public consciousness, to one composite sketch: the breast cancer survivor.

The survivor—in general, a woman we imagine as too young to die, possibly bald from chemotherapy and radiation, and possibly scarred from a lumpectomy or mastectomy, but cheery, grateful for the benefits of early detection, and above all, strong—is the face we picture when we run, walk, and selectively purchase our way through Pinktober. It is the face we picture saving with our Komen-mediated fight “for the cure.” It is the face of hope, and we turn that face into a talisman against our collective fear. And it is a face we’ve seen much more in recent years, with the increased emphasis on early mammogram screening, a practice Peggy Orenstein criticizes in her landmark 2013 analysis of the rhetoric of breast cancer.

Orenstein claims that over-treatment of less aggressive breast cancers (such as DCIS) leads to more survivors, and thus, an implicit claim that we do have power over disease, that our lifestyle choices and preventive practices can ward off the Big C. The emphasis on early detection and proactive treatment that may not even be necessary in many cases has capitalized on the mass hysteria of a disease we characterize as the devil in cellular form, always lurking and ready to snatch the lives of our mothers, sisters, daughters, and friends if given half a chance.

“The fear of cancer is legitimate: how we manage that fear, I realized—our responses to it, our emotions around it—can be manipulated, packaged, marketed and sold, sometimes by the very forces that claim to support us,” Orenstein writes. “That can color everything from our perceptions of screening to our understanding of personal risk to our choices in treatment.”

Orenstein’s analysis presents chilling evidence that women are being oversold their agency against breast cancer, but this simply underscores our culture’s sometimes-fanatic obsession with health as a choice. As Eula Biss writes in On Immunity, “When health becomes an identity, sickness becomes not something that happens to you, but who you are.” We have come to view health as a mark of character, of one’s personal ethics and inherent value.

The sanctified survivor is not the face I picture when I think of breast cancer. This month, and every month, I think of my friend Christy Bailey, who died on June 12, 2015, at age 48, from one of breast cancer’s most aggressive and least discussed forms: IBC, or inflammatory breast cancer. By the time she died, Christy’s cancer, which first appeared as a slight irritation around the scar she had from an earlier, successful lumpectomy, and which cannot be detected via mammogram, terrorized her body for 2.5 years, eventually metastasizing (spreading) to one of her lungs and her bones. Her cancer was what’s called “triple negative,” a hormone therapy-resistant incarnation of the disease making up, according to Orenstein, nearly 20% of all breast cancers. It is also the most difficult to treat.

Cancer is what brought Christy into my life; I never knew her before she had IBC. Christy was diagnosed on November 2, 2012, exactly 10 days before my father died from metastatic renal cell cancer (better known as kidney cancer) at age 63. Christy contacted me via Facebook eight weeks later, shortly after I published an essay describing my early grief.

Christy and I became fast friends because neither of us were grieving correctly. Although I did feel relief that my father was no longer in pain, I was furious at the way he died, and furious with the people around me—some who foisted religious rose-colored glasses at me, some who tried to distract me, some who were shocked that my pain could persist beyond the wake, and some, worst of all, who minimized my father’s death because he had made “poor lifestyle choices,” like smoking and drinking alcohol. Their perspective was that he had done this to himself. He shouldn’t have been surprised by the result, and neither should I. The message that some people deserve cancer is thoroughly encoded into a culture both death-phobic and libertarian in its belief that health is not related to one’s racial or socioeconomic status.

Christy had legitimate claim to anger over her cancer—nobody could argue with the unfairness of her disease. Christy had done everything right: she was a marathoner and triathlete, she ate healthy foods, she was highly educated, a world traveler and peace activist and enormously talented writer. And she had already survived so much: she lost her hair years earlier to alopecia, and had successfully beaten a less deadly form of breast cancer called ductal carcinoma.

Where Christy broke the social contract of disease was in her refusal to rely on positive affirmation as the bedrock of her treatment plan with IBC. She knew going into the debilitating chemo, exhaustive surgeries, and constant barrage of tests that the end goal would most likely be prolonging her life and preserving its quality to the best possible extent. “Beating” cancer was not on the table. According to the National Cancer Institute, IBC is always diagnosed at either Stage III or IV. Christy could—and did—fight as hard and as ruthlessly as her cancer, but she was always going to lose. Her IBC would return and eventually metastasize, and metastatic breast cancer has no cure. To tell her otherwise was ignorance. 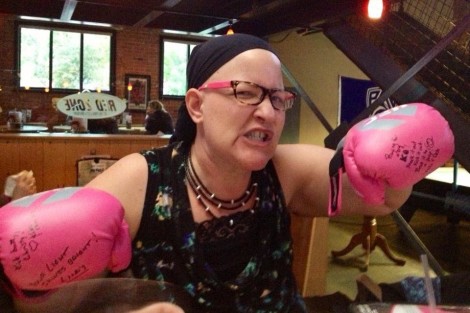 In a raw and passionate essay for Gawker, Lauren Sczudlo admonishes our culture’s reliance on positivity as the best medicine. “Cancer patients are expected to be poster children of a movement, meant to reassure the masses that this plague, and even imminent death, can be overcome with positive affirmations and attitude adjustments,” she writes. While I continued to alienate myself with long, biting Facebook posts about grieving my dad, Christy—more dignified than me—took her honesty to a private page, her “fan club,” as it was dubbed, where she could write about her treatments and emotional fluctuations to an intimate group of supporters, survivors, and “sisters” in IBC and metastatic breast cancer.

Just over a year beyond her IBC diagnosis, mired in an endless battery of treatments, Christy meditated on her 2013 holidays. You have to hear it in her words:

One theme that’s come up throughout my cancer journey is a feeling of failure… There were times I was positive and strong but nobody will be able to say I never complained or that I never cried or that I never felt sorry for myself. When asked how I’m doing or how was my Christmas (over and over and over again—ugh) I couldn’t just say Great! or Awesome! or Fabulous! like everyone needed me to; instead I was honest and said I’m hanging in there, my holiday was OK, I’ve been better. (You wouldn’t believe how people dislike these honest answers. How dare I not be more positive! How dare I not be more cheerful!) And now once again my body isn’t cooperating and my skin is tearing and we’re already having to modify the radiation plan after only four days of treatments. What I wanted to say is: Wait, give me another chance! I can do this! I can suffer more! But sometimes sheer will and determination aren’t enough. Maybe the failure isn’t my body’s or my mind’s, but my ideas about control and how much any of us really have.

Tuesday, October 13th is the only day in Pinktober dedicated to metastatic breast cancer. In a month where the rallying cry can turn into the hollow of cheerleading, where women are expected to be “warriors” in a “battle,” please take a day to think of those living with death sentences, like Holley Kitchen, who posted this powerful video just eight days before Christy died. Remember that a limit of imagination can turn into a lack of empathy. Remember that nobody deserves disease, and that strength really can be too much to ask, a further depletion of a loved one’s dwindling resources. Remember that sometimes compassion comes in the form of just sitting in someone’s darkest room with them, knowing that the only promise in life is that our own rooms will one day go dark, as well.

There is light in the darkness, though. It’s called friendship.

The author would like to thank Christy’s friends Susanna Donato and Anna March, Christy’s sister, Melanie Lewis, and Christy’s mother, Margaret Rivera Bailey, for their help with this article.

Amy Monticello is an assistant professor at Suffolk University. Her work has appeared in many literary journals, and at Salon, The Rumpus, and The Nervous Breakdown. She currently lives in Boston, MA with her husband and daughter. Follow her on Facebook, Twitter, and Instagram.