“Why are you still single?” I’ve been asked this question fairly frequently by guys I go on online dates with. One guy said he was complimenting me with the question. But the reality is I don’t know the answer. If I knew the reason why I was still single, then I would have already worked on my issues and I wouldn’t be single anymore.

What should I say when they ask me this question? What do they really want to know?

Here’s a list of the top 5 shittiest questions in the world.

1) “Do you really need that dessert?”

4) “When are you going to have children?”

These dudes are asking you a shitty question, which is why you feel shitty as you try to formulate an answer. Even if this question is meant as a compliment, the subtext still reads, “There’s something wrong with single people, but I can’t see anything wrong with you, so according to the transitive property you shouldn’t be single!” 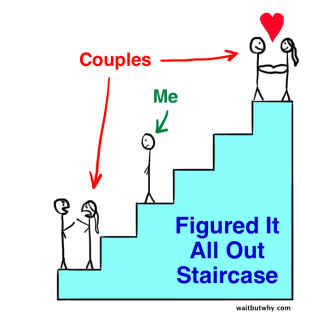 You see who’s on the bottom there? People in a relationship.

It is possible, and likely even probable, that a single person is happy. When you’re single you get to spend all of your time and attention and money on the things you want to do. You get to set your own schedule, you get to go wherever you want, and do whatever you want whenever you want.

And I know that this may not resonate for someone who is actively pursuing a coupled state, but, girl, you got it good. Because here’s another secret piece of wisdom: That couple on the top of the staircase in the super happy relationship? That placement takes WORK. It is not a static state. You have to constantly climb those stairs to stay there.

In order to be in a successful relationship you have to occasionally sublimate your wants, have your ego tested, and even alter the trajectory of your life so it may better align with your partner. This is good work to do and I think that a positive coupled state causes people to grow tremendously, but I also know that growth is uncomfortable.

And in my coupled state I sometimes miss eating hot sauce, tomatoes, and tortilla chips for dinner while watching “The Real Housewives” and trimming my toenails on the couch, letting the clippings just fall where they may. These are things I could probably do in front of my husband, but I love him and I don’t want him to get stabbed in the eye by my toenail shards while he tries to feign interest in NeNe.

I despise the notion that people are single because there is something wrong with them. Singleness is not a disease, it is not a punishment, it is not a negative state of being. Singleness is only bad if you loathe being single, just as coupledom is only good if you enjoy being coupled.

Dana Norris once went on 71 internet dates, many of which you may read about here. She is the founder of Story Club and editor-in-chief of Story Club Magazine. She has been featured in McSweeney’s, Role Reboot, The Rumpus, and Tampa Review and she teaches at StoryStudio Chicago. You may find her on Twitter at @dananorris.